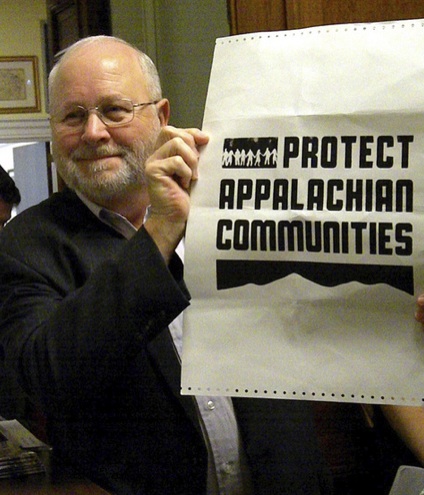 Stanley Sturgill has been chosen for this award for his activism and self-sacrifice opposing mountaintop removal and his continued work with Kentuckians for the Commonwealth, speaking at rallies and hearings, writing op-eds, hosting government agencies in his community, and always being frank about the problems of our region. He served as a mine inspector for decades, working to protect miners and workers. Stanley is not afraid to take the lead in difficult situations, including risking arrest in 2012 as he insisted on his right to meet with his congressional representative, Hal Rogers, who had him arrested rather than end his years of refusing to meet with him. Despite his ensuing legal complications, and ill health, he still continued his work; he has been hospitable, hosting tours of his neighborhood with those who wanted to learn about the issues of his community.

WYMT-TV in Hazard provided local press coverage of the event, which can be found here. The Appalachian Community Fund also documented the event, and we have included their photos below. (Check out ACF’s website, and consider making a donation to further social change in Appalachia!)

Congratulations Stanley, and thank you for all of your hard work and dedication!